This elastomeric roof coating in Miami Lakes started as a clay tile roof repair this past summer. Eva’s roof was twenty-one years old, having been installed after Hurricane Andrew which slammed South Florida in 1992.

Given that a tile roof can be expected to last at least thirty years it was reasonable to rebuild a valley rather than re-roof. This is a personal decision. Some homeowners will replace their roof after it leaks for the first time and some will make many repairs before finally choosing to re-roof. 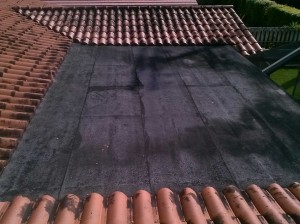 The real problem was the flat roof in the back which was surrounded by tile on three sides. It was a BUR (built-up roof) with a modified bitumen cap, probably Ruberoid which is a high-quality material for residential flat roofs. It had never been coated and had lost a lot of granules but appeared to have been installed correctly. There were also heavy black algae stains. When a roof turns black it absorbs the sun’s UV light and the aging process is accelerated. Most roofing contractors would say it needed to be replaced and I could not argue with them.

Re-roofing would be costly. Tile would have to be torn out.  We were looking at a logistical nightmare with tile on three sides and a screen enclosure behind it. A crew would have no choice but to walk back and forth across the clay tile roof to replace this flat roof. But I had an alternative. What if we installed an elastomeric roof coating application to extend its life to that of the tile roof? Then both roofs could be done at the same time, much more practical. 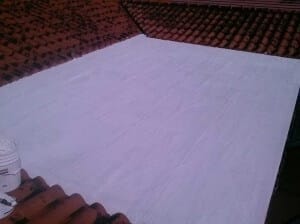 We decided to do it. I would not recommend this on a mineral surfaced cap sheet or 3-ply fiberglass BUR. I felt the Ruberoid had enough life to support the roof coating. Two generous coats of white Somay Roof Mastic were applied after a good cleaning. The roof will now reflect the sun’s rays and hopefully last another ten years. At some point the algaecides in the coating will wear out and the roof will turn black again. It can then be cleaned and coated, this time with only one coat to replace the millage lost to oxidation. This cycle can be repeated until the original material finally wears out completely. Indeed, if this type of maintenance regimen is implemented soon after a Ruberoid system is installed its life cycle can be infinite. In this case “better late than never”.