A compilation of past roofing projects in the Miami area that have not been featured here for one reason – that house was ugly!!! This may be a good place to get ideas if you are getting ready to re-roof and also need to paint. All these houses were re-roofed and painted  – after we were gone . . .

Roofing contractors in Miami spend a lot of time driving around. They often come upon metal roofs, tile roofs, and shingle roofs from past projects. There is some feeling of self-gratification there but, for me, it is most exciting to see the ugly duckling turned swan.

Many times we take on a roofing project while the house, in general, is not in very good shape and the overall look of the home doesn’t always improve very much after we’re done. Consequentially, I don’t take photos and proudly post them online. Then, a few years ago, I saw the Christmas House. 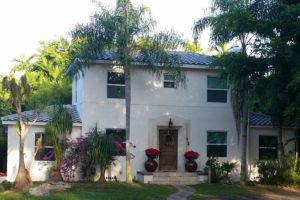 We did this roof in Miami Springs while the home was in the middle of a total renovation. It was a mess and when we were done, it really didn’t get much better. Time went by and, right around Christmas, I was driving along when I saw this house in its finished state. The ornate porch area featured a huge oak door adorned by a lovely wreath and flanked by two huge planters full of poinsettias. The tile roof looked great. Funny, how that works. Immediately I was snapping photos.

Since then I’ve run into more of these “swans” so I’ve created this page for the Projects Section. I’ll continue to post photos as they are discovered. 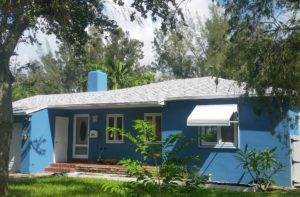 This was once a white concrete tile roof on a home the owner was preparing to renovate. It was rough and the faded tan walls screamed for paint. When we were finished installing the white GAF Timberline HD dimensional shingle roof and I was less than wowed. I showed the client a shingle and pointed out the individual granules and how there was a blend of colors – white, gray, blue, green, even a few black. No tan, which explains why it didn’t impress at first. Choosing a color from a sample, given by the shingle itself, works every time. I guess he listened and, I have to hand it to him on the new windows and paint job, the house looks pretty sharp. Nice roof, too!!! 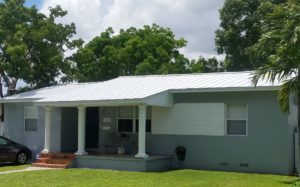 The owner had recently purchased this home when he called. Originally it had a white flat concrete tile roof and the house was in dire need of a paint job. We finished the mill-grade Englert 1101 standing-seam metal roof and soon thereafter, it being close by, I noticed to my horror that he had painted it  . . . brown.  Dark brown, the brown you get in a Crayola box – brown. . .
My wife watches the local real estate and recently informed me this house had sold and, predictably, the next time I drove by it had been repainted. Major difference, don’t you think? Oh, you didn’t see the brown. Good thing . . .

Galvalume: What is it?

Mill-grade is a bare Galvalume finish. Galvalume is basically made by running a sheet of galvanized steel through a bath of 55% aluminum and 45% zinc. It is the zinc which prevents the growth of algae, fungus, bacteria, mold, etc, by disrupting the PH of the metal roof’s surface. I’ve been recommending bare Galvalume for years ever since I noticed that factory painted metal roofs tend to get filthy very quickly due to these growths. The only problem with mill-grade is choosing a paint color. Earth tones don’t work well, in my opinion – remember the brown?!! Stick with what I call the contemporary colors – white, grey, blue, green, pink and yellow. Keep the colors light. Everybody is going with light green or blue, right now, because it works. Roofing contractors in Miami develop an eye for what colors work together with the  different roof systems used in the area.

You have to trust me here, this house was ugly when we were done with this metal roof, another mill-grade Englert 1101. I was driving around Miami Springs and whoa! It originally has an old yellow/orange thing going on – nice for a terra cotta tile roof but, as I’ve already suggested, not great with mill-grade metal.
The house looks a lot better than it did but, personally, I might have lightened up on the blue a bit more.

File this as a “before” photo for a GAF Timberline HD dimensional shingle roof we just did in Kendall, Fl. You’ll notice the roof is gray, or Birchwood, but it was not from lack of effort on my part that the roof is not white. I will be bold enough to make suggestions and then I will move on.

The customer likes it, that’s what matters, but I think the stucco walls are dying for some paint. He’s selling, so the new owners will undoubtedly paint. I’ll keep an eye out for an updated photo.

I give the owner a lot of credit. You could hardly see this metal roof from the road when we were done. The Everglades had completely reclaimed it. She hacked it back with a machete and painted the house herself – good job!
We did a pretty good job , too . . .

This roof looks fine and the house looks great  after painting but ….  Everybody is into these dark 13″ flat concrete tiles now which goes against everything I’ve been preaching. – energy efficiency and roof durability are maximized using light reflective colors. I guess folks don’t want to clean their roofs anymore. The irony is there are a bunch of nano-tech cleaners that are rinse-free. Yes, Spray and Forget is one of them and it works.

I am only so bold as to suggest and  recommend from a roofer’s perspective but then I lay off. This is what they wanted so . . .

This guy was smart, went with an Englert 1300 mill-grade galvalume metal roof to replace the original tile roof. He’s the first one in the area to do so. I wonder how many more will follow suit. Probably not many until he paints. Mill-grade (bare) galvalume just doesn’t work with earth tones, imo. It likes what I call contemporary colors – black, white, gray, blue and green.