Two metal roofs in Miami Springs installed recently by Roofer Mike Inc illustrate how different roofing projects can be though they utilize the same system. Roof decking, underlayment and client preferences are discussed.

Before we could install a metal roof on this home in Miami Springs we had to tear off 3600 square feet of concrete tile. They were loose and easy to clean so we were able to salvage over a thousand of them. We made a few bucks doing this and it is better that these tile are sold to contractors for roof repairs than winding up in a landfill.

After tearing off the old roof we replaced any rotten wood and re-nailed the plywood deck to Code. This is the most important part of the job as far as the integrity of the roof is concerned as metal roofs are only as good as the substrates they are attached to. The wood deck must be made secure and irregularities corrected to allow the panels to lay flat.

Normally a layer of 30lb felt and then a fire barrier are nailed down before installing metal roofs. In this case the homeowner planned to stay in the house a long time and wanted maximum protection. He chose to also install a layer of Tarco PS200ht underlayment which, while not required here, is great for tile roofs as well. In Miami-Dade County the manufacturer specifies the GAF VersaShield fire barrier be done first. Over that the 30lb felt is then tin-capped to Code.  Tarco PS200 is a self-adhered underlayment, or “peel-and-stick”, and adheres to the 30 lb felt. This triple-layer of protection is as good as it gets.

After all that passed inspection it was time to install an Englert 1101 Galvalume white ¾” standing seam metal roof. The bullnose at the eaves, trim pieces and valleys are all done first and must be professionally installed. They are aesthetically important as well as critical waterproofing components.

The distributor arrived right on time with an Englert-approved fabrication rig in tow. This is what has made metal roofing more affordable recently – the ability of local distributors to fabricate panels at the jobsite. We used to go to our regular roofing distributor and order through them from large out-of-town manufacturers – this took weeks.  Then some local shops got their systems approved by Miami-Dade. With that and the portable rigs the middleman was eliminated and the price of metal roofing went down considerably, almost overnight.

We have excellent installers for metal roofs and they did this job in about a week.  Hurricane season was upon us but with this roof and a maximum design pressure of -150 psf the homeowner has nothing to worry about.

The second metal roof we did a little later on was for a customer who wanted to upgrade from a shingle roof – a wise choice. Metal roofs may cost twice as much but can last much more than twice as long as shingles.

We tore off the old shingles and started replacing rotten wood, which was considerable but what was different about this roof was the decking. The house was built in the ‘40s and the deck was sheathed with 1” x 8” pine plank . Also known as straight board, it  was used by builders before “tongue and groove” came along and long before plywood. These decks were sometimes referred to as “space board” as they were purposely spaced to prevent them from butting and distorting. As these boards dried out over the years the spaces became wider. Miami-Dade calls for spaces over ¼” to be corrected so we had to change quite a few. 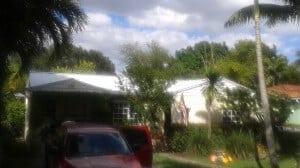 On this roof we installed the 30 lb. felt first, tin-capped it to Code and then put down the VersaShield fire barrier.  VersaShield only needs to be nailed enough to keep it from blowing away till the metal roof is installed.  Later it will be secured by thousands of screws attaching the roof panels. No Tarco PS200 here, which is a major upgrade and expensive. Metal roofs keep the rain out and the 30 lb. felt is a vapor barrier. It protects the deck from humidity and any condensation that might occur.

Inspection time again after which we installed this 1600’sq metal roof, also an Englert 1101, in a few days.  Both homes wound up with the same metal roofs but everything else about the jobs was different. No sweat!